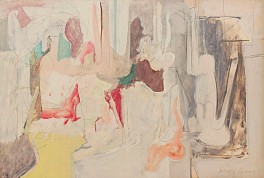 Nicholas Carone was born in 1917 in New York and raised in Hoboken, New Jersey. He began formal art studies at the age of eleven and studied at the National Academy of Design, Art Students League of New York, Hans Hofmann School of Fine Arts, and the Roman Academy of Fine Arts. In 1941, he won the Prix de Rome and in 1949 a Fulbright Fellowship.

Carone taught at universities including Yale University, Columbia University, Cornell University, Cooper Union, and School of Visual Arts. He was a founding faculty member of the New York Studio School of Drawing, Painting and Sculpture. In 1988 he founded the International School of Art, located first in Todi, Italy and then in nearby Montecastello.

Carone was a part of the Abstract Expressionist movement, which relied heavily on Surrealism, poetry, and interpretations of Jungian psychology. His work is now in the collections of museums including the Whitney Museum of American Art, the Metropolitan Museum of Art, the Hirshhorn Museum and Sculpture Garden, and the Baltimore Museum of Art.