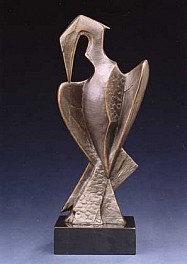 A native of Sweden, Kent Ullberg studied at the Swedish Konstfack School of Art in Stockholm, and at museums in Germany, the Netherlands, and France. He lived for seven years in Botswana, Africa, studying its wildlife and people, and served the last four years there as curator at the Botswana National Museum and Art Gallery. He has permanently made his home in the United States where he now lives on Padre Island, Corpus Christi, Texas. His work has been shown all over the world, including at the National Museum of Natural History in Stockholm, Sweden; the Salon d'Automne in Paris, France; the National Gallery in Botswana, Africa; the Exhibition Hall, Beijing, China; the Guildhall in London, U.K.; the National Geographic Society, Washington, D. C.; etc.

Kent has completed and installed a large number of monumental sculptures worldwide, including "Deinonychus Dinosaurs", a 25ft monument on Logan Square, Philadelphia; "American Eagle" monument, a 2 1 ft composition in Princeton, NJ; a Conservation Fountain for Washington, D. C.; The Broward Convention Center Marine Fountain, 150ft long, by 36ft tall for the City of Ft. Lauderdale, Fl.; and a 65ft tall installation for the Swedish Government Tele-Com Center in Stockholm, Sweden.

Ullberg is a member of numerous prestigious art organizations from which he has received many outstanding awards, i.e. the National Academy, N.Y.C. (Which elected Kent to the status of Full Academician - NA - Spring of 1990 - The highest professional recognition bestowed on visual artists in America); the National Sculpture Society, N.Y.C.; National Academy of Western Art, Oklahoma City, OK; Society of Animal Artists, N.Y.C.; Allied Artists of America, N.Y.C.; the American Society of Marine Artists, CT; the National Arts Club, N.Y.C.; the Society for Wildlife Art of the Nations, Sandhurst, England.

He is a major supporter of many wildlife conservation efforts.