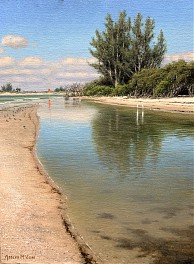 Designated a living master by the Art Renewal Center and widely regarded as a leader of the American landscape school, Joseph McGurl is one of the most important realist painters today.

McGurl works almost exclusively with oil paint, capturing marine and landscape scenes in his native New England as well as other areas of the Eastern US. Along with his childhood as a muralist’s son, McGurl’s days as a sailor and his studies under Robert Cormier both informed and inspired McGurl’s work on his subject matter.

McGurl’s style is a modern extension of the 19th Century Luminist school and is illuminated by a fascination for the interplay of light and coloured by a knowledge of physics. It is this focus that drives McGurl to work exclusively in the rare method of en plein air painting rather than relying on photography.

As a realist, I work in a sphere which must function on several different levels simultaneously. Although I have a deep personal connection to the landscape, it is also a vehicle to explore my interest in modern physics, spirituality, and the exploration of light, form, space, and color interpreted with paint. The slice of reality that man is capable of experiencing and the higher reality that permeates time and space is my true subject.

My artistic influences began during my youth. The luminist paintings I walked past on the way to art classes at the Boston M.F.A. formed part of my cultural identity. Because of the Transcendentalists’ influence on these painters, I became intrigued with the Transcendentalist belief that nature and light in particular were spirituality symbolic.

As a landscape painter who interprets light, I also developed an interest in the study of modern physics. Coincidentally, as well as signifying spirituality, the particle that gives us light, the photon, is a primary vehicle for physicists to better understand the workings of the universe. My interests in the physical and spiritual implications of light are some of the many reasons why I never work from photographic reference. To paint light, I must paint actual light which is composed of photons. A photograph does not contain photons; therefore, it is impossible to interpret actual light from a photograph. To gain a deeper understanding of my subject, I devote a significant portion of my painting time to plein air work. Although my studio paintings are often imaginary, they are informed by thousands of plein air studies which lend emotional and empirical truth to the scenes depicted. Because of my love for the forms of nature and in an attempt to arrive at a more universal and timeless portrayal of reality, a high fidelity to visual truths predominate over a more stylistic approach to my art making.

In addition to its descriptive qualities, I strive to make the paint visually interesting in its own right. Towards this end, I employ a variety of techniques to manipulate the support surface as well as the paint itself. These manipulations present the paint as an entity in itself while at the same time create the illusions found in representational oil painting.