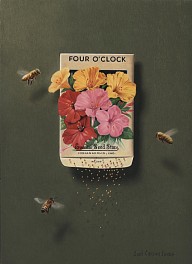 Joel Carson Jones lives, teaches, and paints in Northeastern Pennsylvania, where he was born in 1975.  With the work-ethic of the Scranton/Wilkes-Barre area, he embodies a humble appreciation of simplicity, nature, and the friendships his discipline has fostered. Joel has established an international reputation for his Still Life and Trompe L'oeil paintings. In 2008, Joel Carson Jones was granted the title of Living Master by the International Art Renewal Center.

Jones completed his undergraduate work at Marywood University, in Scranton, Pennsylvania, and also studied abroad in Angers, France. Joel, however, needed to pursue his love of Realism, still-life, and Trompe l'oeil.

His vision and ability to render with impeccable clarity has put him at the center of today's spreading movement—Contemporary Renaissance in the Classical atelier. His reputation, expertise, and work are sought world-wide.

His works continue to appear in many outstanding publications such as The Artist's Magazine, International Artist Magazine and American Art Collector. He is represented by Cavalier Galleries.

ARTIST’S STATEMENT:
As a painter I strive for consistent improvement. I am drawn to heightened realism with the painstaking dedication it takes to achieve this. I am also driven to the challenge of interweaving emotion into these technical pieces. Through emotion, I strive to give a humanistic quality to such work.