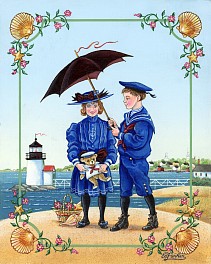 Ed Parker is one of America’s leading painters working in the whimsical folk art tradition. Far from a simple Folk Artist, Ed Parker holds a BFA in Graphic Design from the Massachusetts College of Art and an MFA for Painting and Illustration from the Rochester Institute of Technology. The Atlanta Journal has called him “Grant Wood with a Yankee Sense of Humor.”

For the past 30 years Parker’s unique paintings have appeared in many publications including Yankee Offshore and Country Home magazines, The Washington Post newspaper, and in promotional materials for the National Football League, PBS and National Public Radio.  Parker’s art combines real and imagined historic events, people and places with a sense of humor, elegant design, and sophisticated color sense, to create paintings with a special charm all their own. The artist says: “I am heavily influenced by the maritime tradition of folk tales, yarns and stories, and the Yankee humor that is often in those stories, while most marine artists tend to capture a moment of a story or event - it may be real, it may just be plausible enough to be real. It’s really visual story telling.”

Ed is a Signature member of the American Society of Marine Artists. He has also been the recipient of numerous awards including recognition from the Advertising Clubs of Boston and New York, the Art Directors Club of New York and the Society of Illustrators, New York. He was elected to the Society of Illustrators in 1986. Music is an important part of Ed's artistic muse, and when not painting he is usually playing folk guitar and singing traditional songs, the lyrics of which often find their way into his paintings, completing a circle of folk inspired American traditions. He served as Art Director of Boston Magazine and several Boston advertising agencies. His teaching experience includes design and illustration positions at Massachusetts College of Art, The Art Institute of Boston, Montserrat College of Art and Salem State College. In addition, he has guest lectured and conducted seminars on illustration at the collegiate and secondary level.