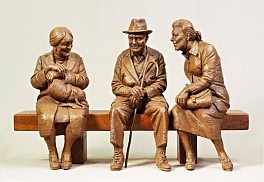 Born in 1926 in the village of Fibbiano Montanino, Lucca, Italy, Bruno Lucchesi has been called “the last of the Renaissance sculptors.”  As a boy, he worked as a shepherd, his first artistic imaginings demonstrated in designs he would carve out of sticks while tending the sheep.  At ten years old, he left his home village to study at a monastery in Lucca, where he had his first exposure to sculpture as an art form.  After a few years, he returned home to work on the family farm, throughout the Second World War.  During this time he met a Yugoslavian refugee artist, who took Lucchesi under his wing, teaching him the basics of drawing and encouraging him to pursue more formal training.  Lucchesi did so, enrolling in the Art Institute of Lucca in 1947, and completing the classical training there in 1950. Subsequently, the twenty-four-year-old Lucchesi moved to Florence and continued to study sculpture, working for the Paternino Reproduction Company, where he made ceramic models of various types of figures for the tourist trade and invented a new technique termed sfoglia, used for creating realistic folds and texture in clothing.   He was appointed assistant professor of architecture at the Art Academy in Florence and so began a teaching career, which would continue in the United States, at the New School for Social Research and the National Academy of Design.

It was 1958 when Lucchesi, with his young wife and child, moved to New York City where his wife’s parents lived.  In his first year in America, Lucchesi worked a variety of jobs, finding little time for his own work and a scarcity of commission opportunities available.  He took to making small sculptures in his spare time, which he began selling through his father-in-law’s frame shop in Greenwich Village.  His work soon found a faithful group of followers and he began to earn his living from sales of his artwork.  In 1959, Lucchesi won the Helen Foster Barnett Prize for Sculpture from the National Academy of Design and the following year had his sculpture The Batherselected for inclusion in the Whitney Annual, an annual exhibition of contemporary painting and sculpture at Whitney Museum of American Art. He returned to Florence, to focus exclusively on his work for one year, coming back to New York City in 1961 to a one-man show at the newly-opened Forum Gallery. His relationship with Forum Gallery would continue for the next several decades, with a total of nine solo exhibitions during that time span.

1962 brought Lucchesi a Guggenheim fellowship (1962-1963) and his first U.S. commission for a frieze at the National Westminster Bank USA of New York. The following decades included a succession of awards and prominent commission work, including four Gold Medals for sculpture: two from the National Academy of Design (1970, 1974), one from the National Arts Club (1963) and another from the National Sculpture Society (1977). Commissioned sculptures by Bruno Lucchesi can be found at churches in Lucca, Italy, office buildings in Manhattan and various other locations throughout the U.S. and Italy.  His work is included in the following collections: Metropolitan Museum of Art, NYC, Brooklyn Museum, Brooklyn, NY; Columbia Museum, Columbia, South Carolina; Cornell University, Ithaca, NY; Dallas Museum of Art, Dallas TX; Hirshhorn Museum and Sculpture Garden, Smithsonian Institution, Washington, D.C.; National Academy of Design, New York, NY; Pennsylvania Academy of the Fine Arts, Philadelphia, PA; Utah Museum of Fine Arts, Salt Lake City, UT; and the Whitney Museum of American Art, New York, NY, among others.