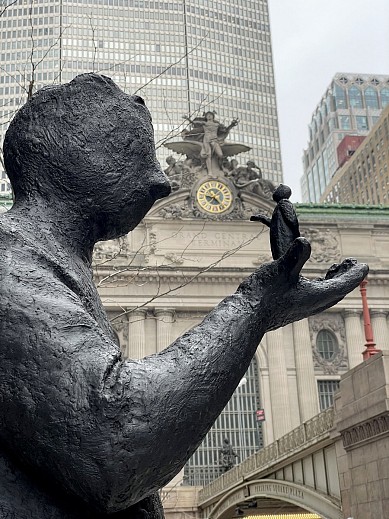 NEW YORK CITY’S PERSHING SQUARE PLAZA WEST IS NOW HOME TO THREE NEW SCULPTURES BY INTERNATIONALLY ACCLAIMED ARTIST, JIM RENNERT
The installations will be on view to all visitors through December 2021
New York, NY, April 15 – Today, Cavalier Gallery is pleased to reveal three life-size works by artist Jim Rennert, which will be installed in New York City’s Pershing Square Plaza West located on the west side of Park Avenue between East 41st and East 42nd Streets in Midtown Manhattan. Each sculpture stands over 6 feet tall and depicts the daily struggles and achievements of everyday people.  The sculpture installations are being facilitated as part of the New York City Department of Transportation’s Temporary Art Program.
Rennert’s works represent the meeting point between the business world and the everyday lives of ordinary people, similar to the way that Pershing Square represents the joining of the business and community aspects of landmark Grand Central Terminal’s neighborhood. These three works embody three ideas key to the fast-paced life of Grand Central, for both locals and visitors:
“Taken together, these three concepts encapsulate the thoughts and feelings of anyone passing through the plaza, whether they’re late for an important meeting, contemplating their next big move, or just taking a break from it all,” said Jim Rennert. “When a visitor sees these pieces, they may very well see them as a kindred spirit doing exactly what they are doing. While not everyone wears a suit, I feel the themes transcend to everyone.”
“When Pershing Square Plaza West first opened to the general public in May 2019, we hoped it would regularly attract temporary art installations from world renowned artists,” said Fred Cerullo, President and CEO of Grand Central Partnership, Inc. “So, as the Grand Central neighborhood begins to come back to life after a tough year, we are really excited that the Plaza will play host to three dynamic, larger-than-life sculptures created by Jim Rennert.”
Timing, Inner Dialogue and Listen will be located at Pershing Square Plaza West across from Grand Central Terminal beginning April 15 through December 2021.
###
About Jim Rennert
Jim Rennert was born in 1958, and grew up in Las Vegas, Nevada, and Salt Lake City, Utah. After 10 years of working in business Jim started sculpting in 1990. He became an expert in the lost-wax casting method, a process that harkens back to Bronze Age, which produces a duplicate metal sculpture from the original sculpture. He began exhibiting in galleries in 1993 and has since gained significant recognition. He continues to exhibit at the major art fairs in Miami, Los Angeles, and New York City, and has been featured in publications such as Sculptural Review, American Art Collector, and The Inquirer and Mirror. His work is in numerous private and public collections, including the Utah Governor’s Mansion, Terra Industries, GSL Electric, The Church Museum of History and Art, and the Granite Education Foundation.
Rennert comes from a business background, having made the decision to pursue his career in sculpture over 20 years ago. His works deal with the physical or psychological challenges of the competitive corporate world, often incorporating figures dressed in business attire and symbolic objects such as briefcases and ladders. The titles work with the pieces to solidify the concepts, and sometimes they reflect on the daily struggles and achievements with a sense of humor and irony. His work has become more serious lately, exploring more on our thoughts and beliefs as a society. Businessman or not, everyone can still relate to the themes in their own personal ways.
About Cavalier Galleries
Cavalier Gallery has offered an unparalleled variety of contemporary fine art for over 35 years.  The Gallery presents year-round exhibitions of paintings, sculpture, and photography in New York, NY, Greenwich, CT, Nantucket, MA, and Palm Beach, FL. Owner, Ron Cavalier, has been a strong supporter of public art exhibitions since the gallery’s inception, continually organizing large-scale outdoor installations of works by world-renowned sculptors. For more information visit www.cavaliergalleries.com
About NYC Department of Transportation’s Temporary Art Program
NYC Department of Transportation’s Temporary Art Program (DOT Art) has installed over 350 temporary public artworks on NYC DOT property throughout New York City in partnership with a diverse body of professional artists, galleries, business improvement districts and nonprofit organizations. City sidewalks, fences, triangles, medians, bridges, jersey barriers, step streets, pedestrian plazas and other unique project sites serve as canvases and foundations for temporary art and cultural programming. www.nyc.gov/dotart
About Grand Central Partnership
Created in 1985, the not-for-profit Grand Central Partnership provides supplemental municipal services, including public safety, sanitation, tourism, and capital improvements, within the boundaries of the Grand Central Business Improvement District under contract with the New York City Department of Small Business Services. For more information, visit www.grandcentralpartnership.nyc
Media Contact
Breanna Suden on behalf of Cavalier Galleries
Breanna.Suden@sudenpr.com