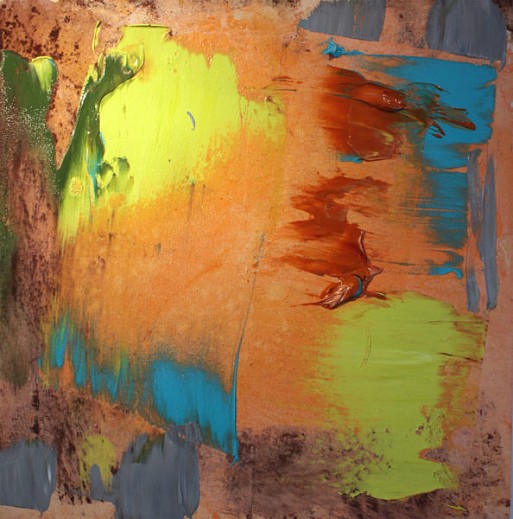 Veteran painter Francine Tint has spent all her life in New York. She has a studio downtown, not far from where she lives on the edge of the West Village. A truly gifted abstract-expressionist artist, Tint was deeply influenced by both the writings and person of Clement Greenberg, who regularly visited her in her studio. Her lyric hand finds expression in wonderfully colorful paintings that incorporate the achievements of the New York School while refusing to succumb to historical reiteration, mawkish emotion, or a grandiose sense of theater. The paintings in the show, whose title is “Explorations,” don’t reinvent the wheel so much as extend art historical precedents–her artistic intelligence is such that she manages a merger of the old and the new, in which the lyric accomplishments of her milieu and artistic forebears are re-invigorated in an art whose vision is genuinely current. This is something that is extremely difficult to do, bur Tint does accomplish it in her art. We are now living in a time when the New York School would seem moribund, especially when its greatest achievements occurred in the middle of the last century! As a result, it is terribly hard for a painter to renew such a well-established vision. But while abstract expressionism has been done with as a movement for a long time, we can see how individuals–practitionera of a style that has been in need of a revision for decades–singly put forth a nearly scholarly commentary on what preceded them in their art.

In this way, Tint belongs to a small group of artists who offer access to a style established a long time ago–but in a way that emphasizes the artist’s integrity and intelligent re-reading of a visual culture whose major status is established. Perhaps because we are, in most of the arts, in a historical situation, it is easy to be skeptical of work of this sort. But one needn’t cling to the past in order to see Tint’s achievement in this fine show as much an expression of what’s next as an act of scholarship. Both Tint’s audience and her critics need to be very clear about the nature of her imagination, which is devoted to extending the remarkable tradition she grew up with rather than reassembling historically given styles. Certainly, current abstract expression has active and gifted current practitioners–we think of Louise Fishman, Amy Sillman, and Larry Poons. These artists do not belong to a group; instead, they are individuals who practice, to some degree, in stylistic isolation–even when they are recognized, as the artists in my short list have been. But then their solitude is echoed by practitioners of other arts–the audiences, for example, for contemporary poetry and contemporary classical music are vanishingly small. This means that artists struggle to preserve stylistic and personal integrity in circumstances unbecoming to the development of any sense of community. It is not that Tint so very alone, though; like her numerous colleagues in New York, she enjoys an ambiance that remains truly sympathetic to her work, even as traditional art neighborhoods in New York are becoming gentrified in the face of exorbitant rents for living and working. (This will not change, especially for younger generations.) 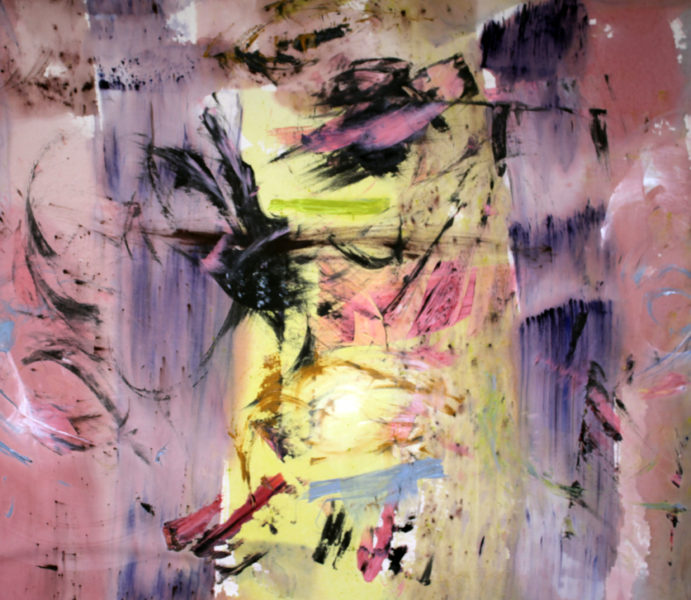 If we look at the paintings of Tint, we can see how color predominates in her art. In The Electric Sunrise I2018). Viewers see a middle-size painting divided in three parts: two light mauve areas bordering a yellow part in the center. These three parts are overlaid with paint, mostly splotches and rough-hewn passages of black, with a bit of light-colored pink in the middle.The composition manages to be both messy and controlled, its overall process essentially lyric, pointing to the elation of pure abstraction. Tint’s exuberant nature is clear in this work and others in the show. Her poetic sense of color is self-evident, as well as being tied to other earlier painters–the art of Helen Frankenthaler comes to mind. But more importantly, we see Tint establishing her own reckoning of a painterly intelligence attracted primarily to feeling rather than intellect. This is not to say The Electric Sunrise lacks intelligence–quite the contrary, it is a work of considerable agility. But as happens with most painters working within this style, an emphasis is inevitably drawn to feeling (the poet and MoMA curator Frank O’Hara, writing at the same time when the major painters of the time were working, has a poem called “In Memory of my Feelings”). Moving Mediation (2017) also accentuates the power of ardor. In the center is a light-orange ground, framed within the painting by splotches of color: on the left, yellow, blue, and grayish purple; and on the right, red and blue sitting next together on top of a yellow patch beneath. It is perhaps harder to describe the formal decisions occurring in these paintings than it is to report on their implicit feeling. One senses a joy that is only slightly contained. This is why Tint’s art is experienced so directly. 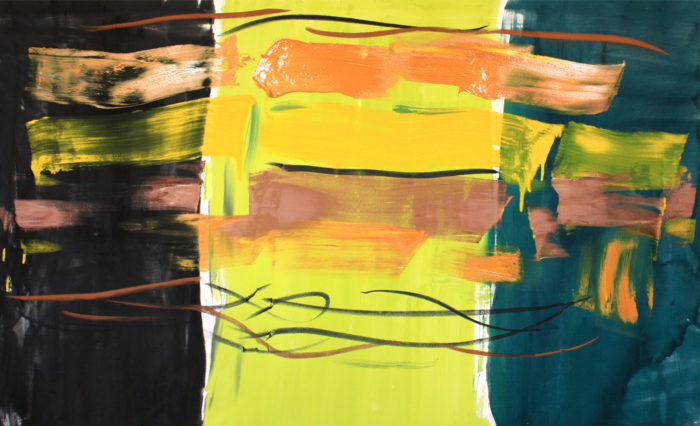 Tiger (2017) is dominated by a massive yellow column occupying the middle of the painting in considerable fashion, embellished by an orange band on the top, a brown band in the middle, and thin, horizontal black lines on the bottom. The thick column is flanked by dark areas on either side. These areas display embellishing features–bands that are yellow and pink, looking a bit like they were produced with a squeegee, although in conversation Tint has denied use of that tool. Whatever instruments she employs, the effects are striking, various, and highly conducive to intensely rendered pleasure. Now that we are living in a time of highly politicized art, as well as emphatic intellectualism, it makes sense to remember that painting can’t do everything for everyone. In other words, the practice of painting might best accommodate its own history rather than bring in outside social issues. Tint belongs to a generation that knew this well, and thus her art reflects her experience as well as her visual decisions. Dubstep (2016), the final painting to be discussed in this review, presents a series of whorls, white on the left and reddish on the right. These spirals are achieved with partially transparent brushwork, revealing a very dark background underneath. We might read the painting as portraying an archetypal, if also abstract, imagery. But it is inevitably hard to incorporate specific readings into so nonobjective a work of art. The painting’s psychology stands on its own–visionary, more or less unmeasured, and fearless in its self-sufficiency. Painting needs this kind of directness and unvarnished strength. Tint is to be congratulated for both qualities.