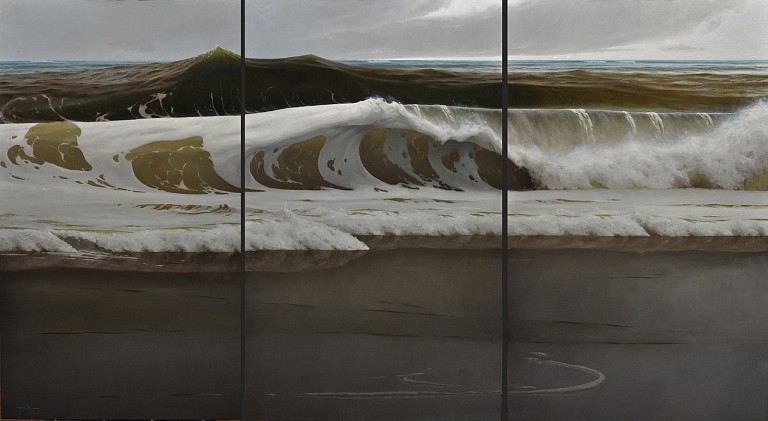 For now, he must be Neptune, preoccupied with the much larger task of beating and beckoning the waves. From Maine to Miami, seascapes have long tugged on the restlessness of wayfarers’ eyes and artists’ hands. From watercolors depicting palm trees to glossy hyperrealistic vistas, the risks undertaken by those who navigated peril have been rendered romantic by those who navigate composition, chroma, and value. Horizon lines exist for both captains and painters.

The seascapes of Edward Minoff, then, both recall and pivot from this experience, memorably and masculinely recorded by the likes of Melville and Hemingway. Though Minoff’s works are also memorable and masculine— the brushwork is pondered yet vigorous, enough that one denotes a massive, Neptunian hand behind it — they do not feel nostalgic for either yesteryear’s adventures or glittering vacations. Though brute force lurks beneath the waves even at their calmest, Minoff’s works do not recall Coleridge’s The Rime of the Ancient Mariner as much as Wayne Thiebaud.

The Morgan Library in Manhattan hosted a retrospective of Thiebaud’s drawings, “Wayne Thiebaud: Draftsman,” which ran from May 18 through September 23, 2018. Even in the exhibition’s loosest sketches, Thiebaud prioritizes volume. The fatty weight of each delicacy is often overshadowed by color and brushstroke in his paintings, but in his drawings and pastel works, it’s all the easier to imagine the satisfying plop of each confection as it’s placed onto its platter or dish.

Minoff’s seascapes, also, emphasize volume over viscosity. Both Minoff’s bodies of water and paint application are luscious and local, but it’s the weight of each wave that lends his seascapes the satisfying hiss of each crest as it thrums against the shore. The foamy, white crests even look like Thiebaud’s icing, each cap a peak in frosting. Neither Thiebaud nor Minoff focus on extraneous detail; neither crumb nor seashell are included in their works. They hone in on draftsmanship and mass. Whether culinary or oceanic, every form depicted commands space in its own plane, and is carefully designed — going back to the heart of drawing, the Florentine concept of disegno — by its respective artist. This is what lends monumentality to Thiebaud’s otherwise-humble sweets and to Minoff’s craggy, kinetic water.

This focus on the bigger picture of picture-making also reverts back to that Neptunian hand pushing and pulling the paint: it allows Minoff’s water to also flex like a giant mitt, opening to reveal smooth palms and closing over splashing knuckles. Minoff trusts that his audience can fill in the missing detritus of his scenes; for now, he must be Neptune, preoccupied with the much larger task of beating and beckoning the waves.

“Let him think that I am more man than I am and I will be so,” Ernest Hemingway wrote in The Old Man and the Sea. Thiebaud made simple sweets more than they are because we believe his considered, volumetric depiction of them. Minoff makes seascapes more enigmatic and singular because we believe the weight — physical, mythological, romantic — with which he imbues them. An artist transforms into the Roman god of the sea, indeed.